Another tragic date of the Jewish history in Bessarabia. On September 12, 1941 evacuation began from the transit camp of Vertujeni. The documents of the National Archives of the Republic of Moldova, presented below, will give an idea of ​​the Romanian authorities’ plans to implement this operation. 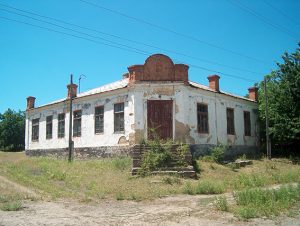 Vertujeni was a Jewish agricultural settlement in the Soroca district, founded in 1838. On the eve of the war, about 2,000 Jews lived here. With the outbreak of the war, part of the inhabitants moved across the Dniester (some of them managed to evacuate deeper into the USSR), those who remained ones were killed, and their houses were looted by local residents.

Vertujeni transit camp was filled gradually. On August 17, 13 thousand Jews from the north of Bessarabia, who were deported to Ukraine by the Romanians, but at the insistence of the German authorities were returned to Bessarabia, filled the place. The next day, another four thousand Jews from Lipcani, and on August 21 several thousand from the small camps and villages of Soroca County arrived.

Jews were tired of two months of walking along both banks of the Dniester. They have nothing to sell, everything has already been taken from or lost on the road or in the camp. Despite poverty, they must pay two lei for each person who left the camp in search of food. There was almost no water; people spend hours at a few camp wells. They had to do hard and useless work.

Because of crowding, hunger, thirst, diseases and exhaustion, 50 to 100 people died daily in the camp. Colonel Alexandru Constantinescu, the camp commandant, could not agree with the existing situation of the Jews, and left his post.

From the memoirs of the native Clara Lyubarskaya:

“… In Vertujeni, every day many people died of hunger and disease. The men were taken to works and they began to pave the way. They were helped by children and girls. Me and my sisters were also taken to the barracks, where we washed clothes, cleaned, helped in the kitchen. Nothing was paid, but we received gave some food: sometimes extra potatoes or a little corn flour. To have money, it was necessary to go to the market and sell something…”

From the memories of Sarah Shechter:

“… We were told that the column would go further to Vertujeni. The sick were told to wait for the carts. There was a rumor that those who remain will be shot. With us we had an old sick grandmother, and we stayed. A few days later, the Moldovans on carts really came for us.

The man who drove us turned out to be a decent person. When we reached Vertujeni, my mother wanted to thank him – to give him a winter jacket. He did not take it – he looked at us and left.

On the way I saw a terrible picture: an elderly woman was standing on the knees near the road – completely naked, only she a headscarf was thrown on her back. She stood with her head down, not even turned back to the road. In the same place was an elderly man in lingerie. He lay all stretched out. Maybe he was already dead.

… In Vertujeni, we lived in a room with several families. Water was taken from the waterfall. It was good, clean, but it was necessary to go far up the hill. Water was a great delicacy. ”

The new commandant Colonel Vasile Agapi and Captains Buradescu and Radulescu did everything to humiliate and destroy Jews – they tortured, deprived of water and food, personally killed, raped women, and seized valuables.

On September 10, 1941, the camp administration was ordered to deport Jews to Transnistria.

Here are the documents that guided them: 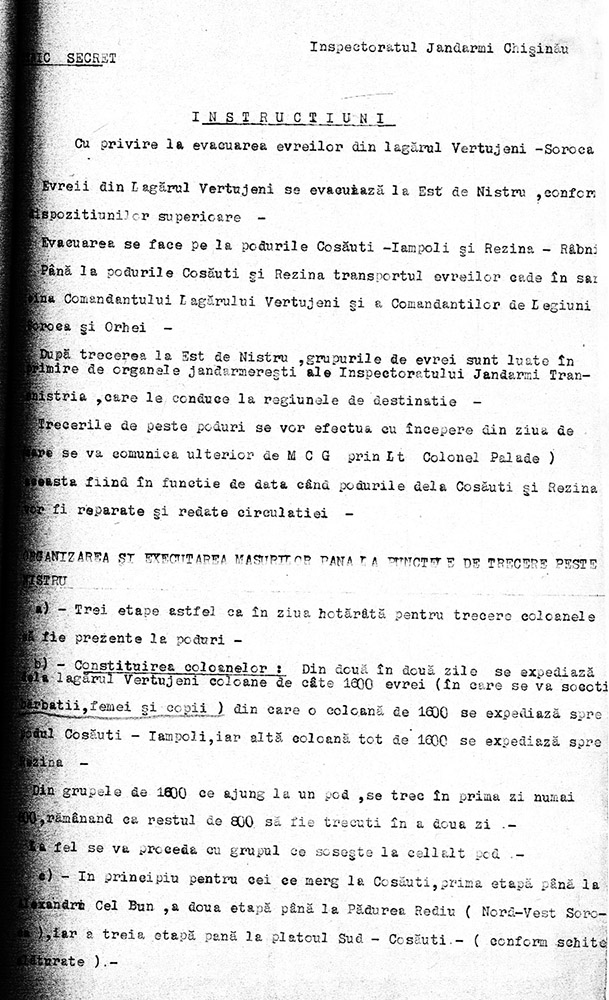 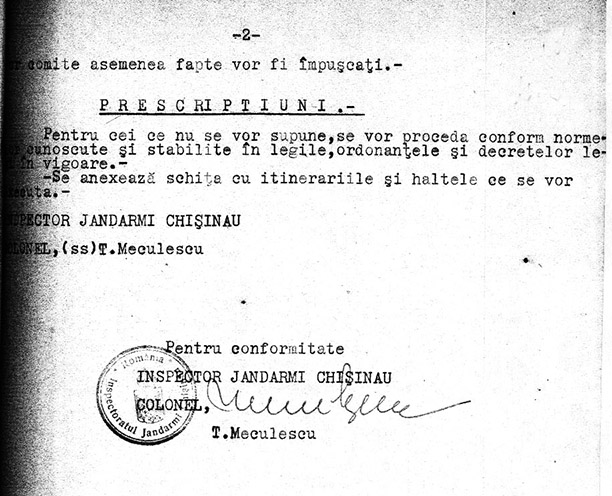 In accordance with the order of Mr. General, the following is required:

Evacuation of 22,150 Jews from the Vertujeni -Soroca camp will begin on September 12, 1941 precisely at 8 o’clock to cross the Dniester to Ukraine

There are two routes for evacuation:

Jews from the camp will be gathered into groups of up to 1600 people, including children, for each route, and an escort will also be formed.

The camp management will allocate an officer for each route and gendarmes for protection.

The speed is 30 km per day, the route is divided into three stages.

Transition is conducted without any formalities.

Every two days two new convoys for 1,600 people are organized along the same routes with the same stops and the same prepared officers from the legions.

The commanders of the legionnaires, together with the local authorities, must provide each convoy with 50 carts for carrying luggage and those who cannot march, order the stations along the route together with the local residents to cleanse the land, bury the dead and provide places for temporary residence on the edge of villages, and eliminate epidemics.

Those who do not obey will be punished in accordance with the norms established by laws, orders and decrees.

A sketch with a route and stops is attached 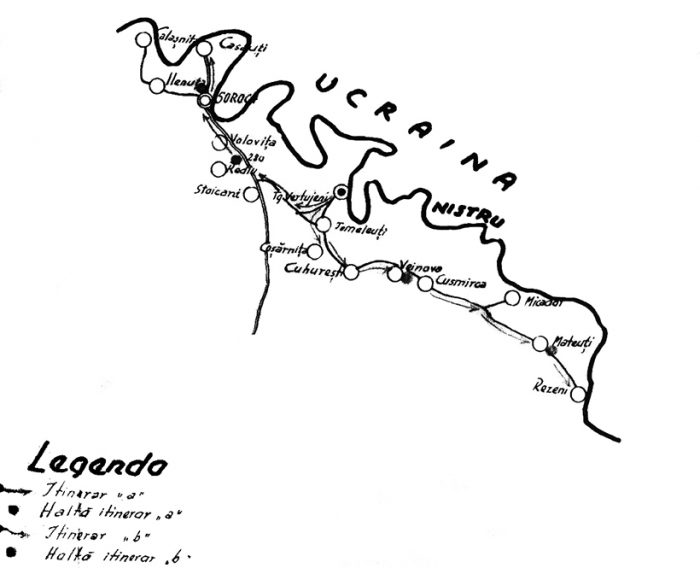 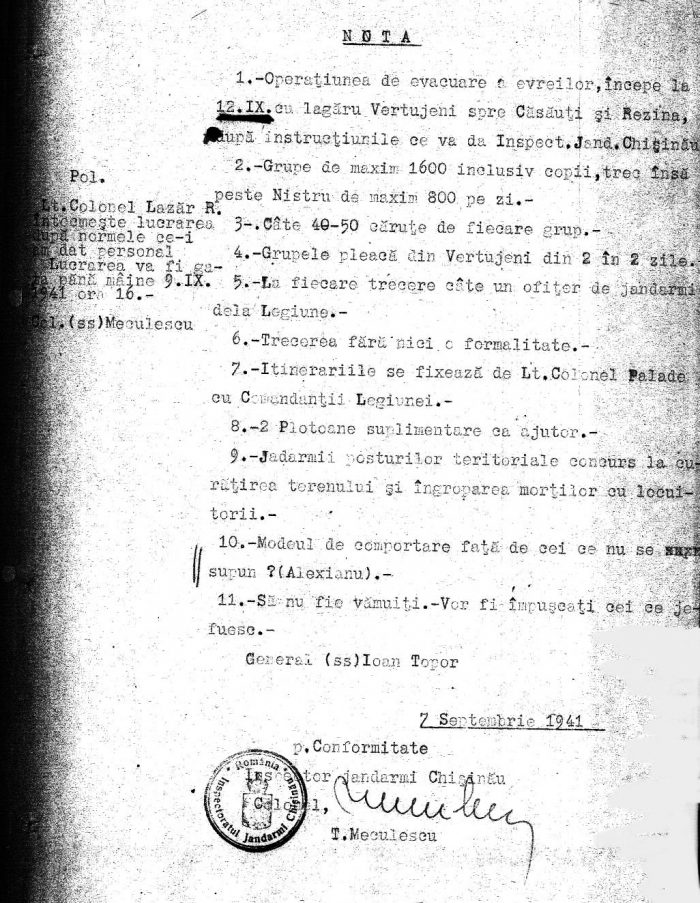 Let us pay your attention at the point 10. What did ALEXIANU mean in the order?

Lieutenant Augustine Rosca, responsible for deportation in Securiany and Edinet, reported: “This meant that all those Jews who could not walk along with the column because of weakness or illness had to be shot. Two or three days before the convoy left, I had to send a subordinate along the route to prepare places for execution. The graves for 100 bodies were dug every ten kilometers at a sufficient distance from the villages so that cries and shots could not be heard, or on the slopes where water could wash the bodies. The local authorities were instructed to mobilize the population, especially the youth for these works. For those who could not move by themselves, the standard word for the execution was the word ALEXIANU. ”

Convoys were formed chaotically: families were separated and moved along different routes. 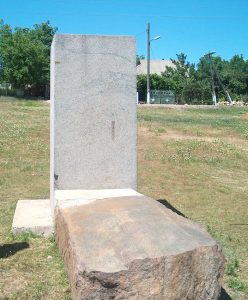 This division was the most dramatic moment of deportation, even more painful than robbery or beating, more tragic than death.

The speed of passage was observed: 30 km per day for people exhausted after two months of walking in suffering and famine. There were sick, elderly, women with children in their arms. Instead of 50 carts there were only 4 or 5, paid for by refugees. Not having carts, beaten, tortured by hunger and thirst, the Jews perished along the whole route.

And although in the instructions the robbery of Jews was forbidden, the gendarmes being neglected and unpunished withdrew the last remnants of what they had managed to save. The clothing of the dead was sold to the peasants.

On October 8, 1941, the transit camp in Vertujeni ceased to exist.

Materials of the National Archive of the Republic of Moldova (ANRM)

Matatias Carp THE BLACK BOOK THE SUFFERINGS OF THE JEWS IN ROMANIA 1940–1944 Vol. III TRANSNISTRIA
http://www.survivors-romania.org/pdf_doc/black_book_3.pdf

Vladimir Solonari. THE TREATMENT OF THE JEWS OF BUKOVINA By THE SOVIET AND ROMANIAN ADMINISTRATIONS IN 1940–1944
http://holocaust.kiev.ua/news/jurnal_nodostup/Solonari_Eng.pdf